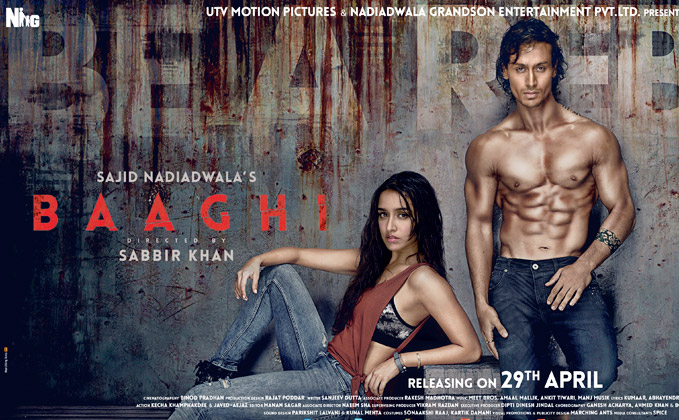 FilmyPundit verdict: What do critics think about rebel Baaghi?

Tiger Shroff and Shraddha Kapoor Starrer action packed movie Baaghi has hit the silver screen. And it has garnered a mixed reaction from the critics. Here are some of the top reviews about this movies.

Indian Express: First half of Tiger, Shraddha film is enjoyable

When we come upon him first in his second film, ‘Baaghi’, we see Tiger Shroff upside down, balancing his full weight on a thumb and forefinger. It is an impressive sight, to see someone so fit, so agile, so much in command of his body. It is the money shot of the film. Whenever we see Tiger doing something that involves his hands, legs, torso, head, all moving in perfect sync, scything up, slashing down, revolving on the balls of his feet, we are watching: it is a pleasure to see this young actor move, no jerk, all flow

TOI: It would’ve been more appropriate to let the film’s tagline read – Rebels without a cause

It would’ve been more appropriate to let the film’s tagline read – Rebels without a cause. “Baaghi bano par ek maqsad ke liye,” says a Kalaripayattu guru to Tiger in the film. But the ‘maqsad’ doesn’t make its way into the screenplay. The film is singularly dull and devoid of logic with nearly no spark between the leads. Shraddha and Tiger are earnest and director Sabbir Khan’s efforts show, but the focus is not on making a good film. Just winsome action suffices for the makers.

NDTV Movies: Baaghi is eminently avoidable. Keep out of its path.

The makers of Baaghi – the writer and the director, two separate but obviously like-minded entities – seem to believe that it is perfectly all right to rebel against reason, logic and good sense. Without a credible screenplay to hold it together, this 140-minute action film can only heap endless misery on moviegoers who detest meaningless bone-crunching. Watching an irate but purposeless combatant single-handedly demolish all his adversaries from Kollam to Bangkok is excruciatingly monotonous.

HINDUSTAN TIMES: Tiger learns Kalaripayattu and kills half of Thailand

Take a dramatic Bollywood love story and crash land it into an adrenaline-pumping fight movie, and you have Tiger Shroff’s second film, Baaghi. Unlike Heropanti (his first film), this one is all about being fast and furious: the scene shifts at a frenetic pace from emotional scenes to gravity-defying fight moves. Somewhere in between, you have Shraddha Kapoor’s rain dance and melodrama.

BOLLYWOOD HUNGAMA: BAAGHI is a typical masala entertainer which scores high on action and performances from the lead cast.

The film starts off with the introduction of Ronny (Tiger Shroff) and the kidnapping of Sia (Shraddha Kapoor). Desperate for money for the treatment of a young boy, Ronny undertakes the task of getting back Sia from the clutches of the villainous Raghav (Sudheer Babu). As he boards the flight, the viewers are treated to a flashback of events that connects Ronny’s yesterday with his today. The flashback of events reflect the blooming love story between Ronny and Sia and how Sia’s money minded father (Sunil Grover) plays the villain in their love story and agrees to marry her off to Raghav, who lures him with oodles of money. Because of a certain misunderstanding between Ronny and Sia, their relationship goes for a toss. Ronny, meanwhile, at the behest of his late father Colonel Samarjeet Singh, unwillingly becomes the student in the Kerala-based Academy Of Kalaripayattu, that’s run by Guruji (Grandmaster Shifuji Shaurya Bharadwaj). In due course of time, Guruji tames the wild and carefree Ronny into an extremely disciplined student… in other words, a rebel with a cause. But, when Guruji gets to know about his son Raghav’s plan of forcibly marrying Sia, he raises strong objection.