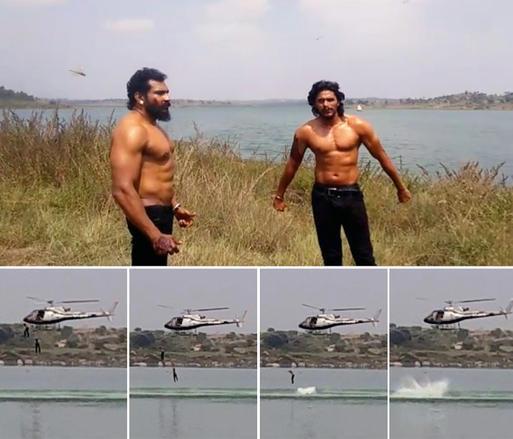 This incident is reported from Ramnagar in Karnataka where the shooting of the sandalwood film ‘Mastigudi’ was taking place. The Villain actors, Anil and Uday are reported to be dead in this incident.

All this happened, when they were shooting the climax scene of the movie. In this scene, the protagonist, actor Duniya Vijay chases the villains Uday and Anil and forces them out of the helicopter. After which all three had to reach the bay swimming.

But after the jump, the actors felt very difficult to swim and there were no basic safety measures that have been employed on the site. Somehow, the locals were able to save Duniya Vijay. However, the other two actors drowned in the Tippagondanahalli Kere. The swimming experts searched for around 2 hours until the bodies of deceased were found. The police are investigating the issue now. According to the police, the crew did not have permission to shoot inside the reservoir.

It is said that both the actors were not experts in swimming and were traveling on a helicopter for the first time.

Soon after the incident, both the fans and actors lashed out their anger on Twitter and Facebook.